Cypress Development Corp (TSX-v: CYP) / (CYDVF) continues to follow through with everything it said it would, largely on time and on budget. Recall, Cypress is funded through its upcoming Pre-Feasibility Study (“PFS“), which is expected within the next few months.

All of the work being done is critical towards delivering not just a PFS, but an optimized PFS that stands head & shoulders above the successful Preliminary Economic Assessment (“PEA“). It’s easy to forget, but we should not take for granted, that this work de-risks the project, making it more valuable to investors and prospective strategic & financial partners.

On February 26th, Cypress announced the completion of the first phase of metallurgical testing for the PFS. The objective of the program was to simulate the leaching portion of the process flowsheet from the PEA, which consists of agitated tank leaching. The testing confirmed the range of parameters used in last year’s PEA. The results demonstrated lithium extractions of 75% to 83% and sulfuric acid consumptions ranging from 85 kg/t to 132 kg/t.

In my opinion, the lithium extraction range of 75% to 83% is better than it looks. Recall that in the PEA, an 81.5% recovery was used. However, the range of recoveries in the dataset from the PEA was a lot wider than 75% to 83%. I’m excited about this particular result, the tighter range. The key sentence from the press release was, “Recoveries of lithium were consistently achieved & optimized in the range of 75% to 83% for varying sets of leach conditions.”

Regarding acid consumption, this is a big deal as it’s a significant operating cost. In the PEA, acid consumption was pegged at 125 kg/t (again, a chart shows a much wider range of acid consumption outcomes). So, I’m pleased with the new range of 85 kg/t to 132 kg/t, with a mid-point of 108.5 kg/t, which is 13% lower than the 125 kg/t in the PEA.

A 13% improvement would be significant for a major cost item. 85 kg/t is 32% lower than 125 kg/t. Perhaps the size of the acid plant Cypress plans to build could be smaller and less costly than the one in the PEA?

The focus of the remaining work for the PFS is to demonstrate actual lithium production, from Pregnant Leach Solution into a lithium product that can be sold. The PEA process flowsheet entails purification, evaporation & crystallization.

A successful demonstration of the PEA flowsheet was done. A 10-liter sample of leachate (water that has percolated through a solid and leached out some of the constituents) grading 110 ppm lithium was concentrated to > 4,000 ppm lithium via evaporation alone.

The resulting concentrated solution contained only negligible levels of magnesium and other impurities. Purification, evaporation & crystallization remains the base case assumption for the PFS. However, alternative methods of lithium production are also being studied.

“We are very pleased with progress on the first phase. While it was time consuming, the information gained on the behavior of the clay during leaching is invaluable and represents a huge step forward in our understanding of the leaching process. With this as a foundation, we are confident in moving forward to the next phase of testing in the PFS.”

I find it encouraging that even as CEO Willoughby is very happy with the new understanding of the leaching process gained to date, there remains room for further improvements. In addition to the promising acid consumption & recovery rates mentioned above, some tests were conducted at a lower range of temperatures than the 70 to 90⁰ Celsius tests contained in the PEA.

All of this might sound boring, and it is, but there are a number of factors that all have to come together in an optimal way to achieve the best PFS outcome. Temperature (energy) impacts recoveries, as does the amount of acid used. Lower the levels of both, while maintaining a good recovery rate, and the op-ex savings could be in the hundreds of US$/tonne.

The exciting part comes when the PFS is delivered. Readers should not lose sight of the compelling PEA metrics. The after-tax NPV(8%) was US$1.454 billion, with an IRR of 32.7%, a 0.1 to 1.0 strip ratio and the cap-ex was US$482 M — that’s a NPV to cap-ex ratio of 3:1, the best among its peers, including brine projects. Based on the past 2 press releases describing PFS work, I believe (my opinion only) that advances in project economics are possible in the PFS.

I’m not saying we will see 50% improvements in any of the key metrics of after-tax NPV(8%), IRR, op-ex or cap-ex, but I would not be surprised to see improvements. Remember, not only are shareholders & strategic investors looking for better economics, equally important is the higher level of certainty, the use of only Reserves and Measured & Indicated resources instead of Inferred resources, more detailed engineering, and tighter estimates of capital, operating costs & other economic parameters.

There are a lot of lithium PEAs out there, but far fewer PFS or BFS reports. As the lithium market improves, hopefully investors and other key stakeholders will notice the difference.

Disclosures: The content of this interview is for information only. Readers fully understand and agree that nothing contained herein, written by Peter Epstein of Epstein Research [ER], (together, [ER]) about Cypress Development, including but not limited to, commentary, opinions, views, assumptions, reported facts, calculations, etc. is not to be considered implicit or explicit investment advice. Nothing contained herein is a recommendation or solicitation to buy or sell any security. [ER] is not responsible under any circumstances for investment actions taken by the reader. [ER] has never been, and is not currently, a registered or licensed financial advisor or broker/dealer, investment advisor, stockbroker, trader, money manager, compliance or legal officer, and does not perform market making activities. [ER] is not directly employed by any company, group, organization, party or person. The shares of Cypress Development are highly speculative, not suitable for all investors. Readers understand and agree that investments in small cap stocks can result in a 100% loss of invested funds. It is assumed and agreed upon by readers that they will consult with their own licensed or registered financial advisors before making any investment decisions.

At the time this article was posted, Cypress Development Corp. was an advertiser on [ER], and Peter Epstein owned shares in the Company. Readers understand and agree that they must conduct their own due diligence above and beyond reading this interview. While the author believes he’s diligent in screening out companies that, for any reasons whatsoever, are unattractive investment opportunities, he cannot guarantee that his efforts will (or have been) successful. [ER] is not responsible for any perceived, or actual, errors including, but not limited to, commentary, opinions, views, assumptions, reported facts & financial calculations, or for the completeness of this article or future content. [ER] is not expected or required to subsequently follow or cover events & news, or write about any particular company or topic. [ER] is not an expert in any company, industry sector or investment topic. 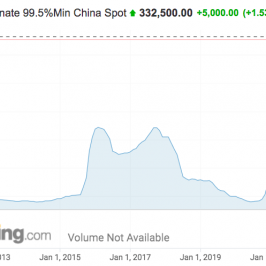